With all the Olympic coverage going on and all the shots of London’s iconic landmarks, it has made me think a lot about my summer in London.  So why not devote some posts to my time there!

The summer after graduating from college, I headed off to London to participate in an internship program that allowed me to get job experience and travel abroad.  Basically I paid to go work in  London for the summer.  My program included an internship placement in the industry of my choice- where I worked Monday-Friday, housing, breakfast and dinner each day and weekend excursions.  One of my best friends, Katie, did the program with me and we had the summer of our lives.  While I was there, I sent weekly emails about what I was up to.  Over the next couple weeks, I am going to share some of those emails (because I was hilarious), tons of photos and some reflection on what that summer did for me.I hope you enjoy!

Well so far Englandhas been an adventure.  We landed and had an hour wait on the runway while our pilot was trying to get us stairs and buses so we could get off the plane on the middle of the runway.  He told us everything was “in shambles” and things were going so slowly “it was a bit like watching paint dry”.  What a way to start my adventure! 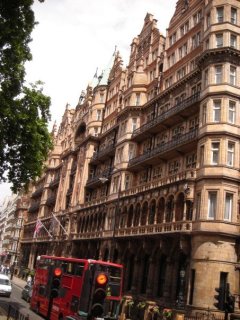 This was the hotel we stayed in our first couple nights.  Isn’t it pretty?
At the hotel we got our keys from a small man that sort of reminded me of Egor.  I’m not sure if it was his poor posture or the suit that he was wearing that was about 3 sizes too big that made him look that way.  The elevators which are a rarity in most hotels only held Katie and I and our bags.  As we got off the elevator we were met again by Egor and he had given us the wrong room keys.  He took the keys and headed back downstairs.  When he returned we squeezed back onto the elevators (he waited for the next one) and went one floor lower.  Finally we were there.
On Sunday night we got dinner at a pub and felt like assholes for not tipping anyone. It’s really awkward. And the money system is so confusing. The coins make no sense. In fact some of them are not even cents… there are coins for £1 and £2 and that is just hard to deal with since I never use change at home… anyway, so Sunday night we went to bed and both woke up at like 3 am played go fish and war for a little while and then turned on the TV. BIG MISTAKE. On one of the channels there was people sleeping in a hotel room. It was very Vacancy if you ask me. We kept going back to it to make sure they were still alive and of course wondered if we were on someone else’s TV somewhere else in the building. When we did get back to sleep it wasn’t for long.
We got up and went down the street for breakfast. I ordered what seemed like a traditional breakfast. However, it was strange. Half the plate was baked beans, (which I don’t like anyway and had always assumed where a barbecue staple as opposed to a breakfast item) Then there were scrambled eggs which were very dry thank god, but it was like less than an eggs worth. There was toast and bacon and hash browns, but all and all it was good. Oh and there were roasted tomatoes, but I let Katie have those since I love them so much- yuck.
After checking out of our hotel and walked the 4-5 blocks to our new 2 month home, the Arthur Tattersall house. We were among the first people there and some how we really lucked out and have one of the biggest rooms in the place.  All the other rooms in the building are about half the size of this one.  The bathrooms are interesting to say the least.I am not thrilled.The shower is like a room of it’s own (there are two) and it has a motion sensor light and well I haven’t been brave enough to try it yet (don’t worry I showered yesterday morning at the hotel)The toilets are just kind of gross but whatever.

This is our flat.  I should have taken more pictures of it because it was much bigger than it looks.  In fact we had impromptu kickboxing classes in it (with 4 people).
Finally it was time for our orientation dinner. There is definitely a mix of people here.  There is one girl who I’m pretty sure takes the cake as the most annoying girl I have ever met. I’m not sure I can really explain her in words except to say that already she is known as “that girl”.   At dinner we had a ton of good, foul and interesting food. It was a taste of quite a few things and the only thing that I can confidently tell you I ate was a tuna sandwich and celery. Everything else is a mystery to me but good. (This is clearly a big step for me since you know how picky I am with food). At dinner, I met a girl I am working with.
After dinner we all went like a heard of cattle into the nearest pub, especially the kids that were under 21. (Also it happens to have some of the best deal I have found so far on drinks.) Literally, at least 20 girls went walking into the pub at once and one of the bartenders said it was about to be the best night of his life.   But it closed at 11pm which is just really strange to me.
Stay tuned for more letters and pics from London!

5 thoughts on “Letters from London- Part One: Arrival”