Hello there guys and dolls.  Who are we kidding, it’s mostly dolls.  Today I want to talk about something I know a lot about.  Not only was I an advertising major, but I am a television junkie.  Put those together and you get self determined commercial expert.

Okay, actually I kind of hate watching commercials.  Lately though, I’ve been catching some commercials that have left me with some different feelings.  Watch these and tell me what you think!

Let’s start with the Forevermark commercial. The first time I saw this little gem, I cried. It may have been because I was recently single, hormonal and it was about 2 PM on a Saturday and I was still in bed… yeah that was probably it. Even so, every time I watch this commercial I fantasize about my future husband saying these very word.

Okay, let me talk about this one. Sure at first glance this commercial is SUPER offensive. I mean seriously, what women notices a guys hair first?  Don’t they know women at all?  Plus it kind of weirds me out to see boobs with feet. But, overall, I kind of like it. At least I remembered it, right? What do you guys think about this one?

The commercial I hate most in the world, even more than those obnoxious Quizno’s Rats from a few years back is the Chanel No. 5 commercial with Brad Pitt. It’s hard for me to say that since I love me some Brad Pitt, but seriously Brad? This commercial doesn’t make me want to buy Chanel it makes me want to turn the channel. This is the longest journey of my commercial watching life Brad. I don’t like it. I don’t like it one bit.

Finally, while watching all these commercials and typing this post, I caught some actual television programming in the form of E! News.  There was a Jonathan Adler quote that I just had to share (and make a little pretty)! 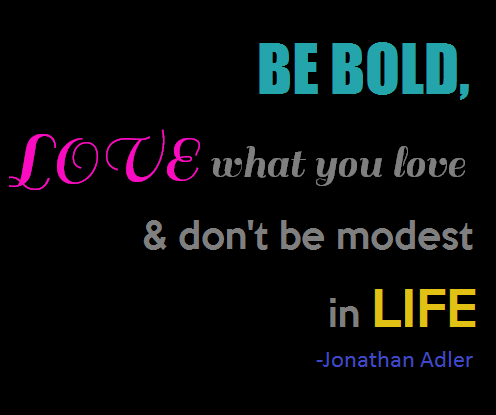 2 thoughts on “And Now For a Commercial Break”