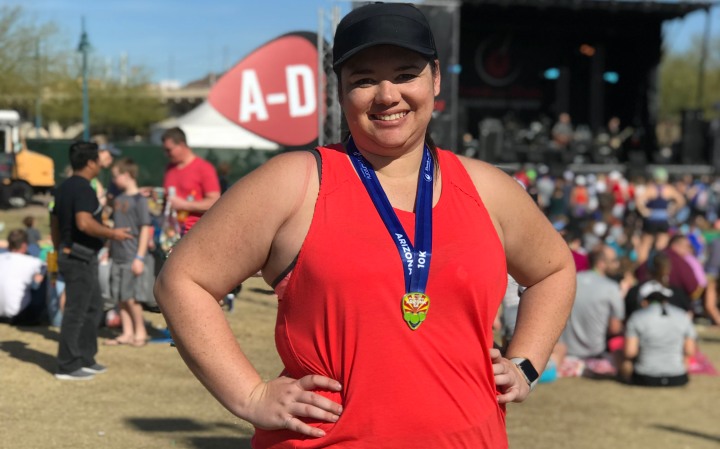 It was nearly 4 years ago that I was at a cheering station for the Tempe Ironman.  I was there to hold signs and encourage the athletes.  We were stationed just after the transition from the cycling portion to run.  For anyone who doesn’t know much about an Ironman, it’s kind of insane!  First the athletes swim 2.4 miles.  Casual right?  Then they do a quick change and hop on a bike to cycle 112 miles.  Nope I didn’t accidentally add an extra number they cycle over 100 miles.  Then the athletes finish off the day by running a marathon.  So I don’t know about you, but I find it hard to imagine doing any one single leg of the event, let alone all three back to back to back.  So anyway, there I was holding signs and cheering for people who had just finished 114.4 miles, but still had 26.2 miles to go on foot.  Some didn’t even look tired, but some looked totally gassed.  The later were the ones that inspired me.  I found myself welling up with tears at the strength and determination I saw pass by me.  It was that day that a tiny voice inside me said, you should try that.  And then I called that voice crazy and ignored it. 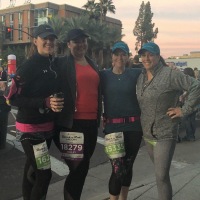 As the next couple years went by, I found myself reading articles, books and watching videos about people doing triathlons.  I learned more about the sport and found out that you didn’t have to do such long events and that there were shorter versions like a half Ironman, Olympic Triathlon or a Sprint Triathlon.  To give you some perspective, a Sprint is a .5 mile swim, 15 mile bike ride and a 3 mile run.   That seemed reasonable.  I knew I could probably do any one of the segments so with some training I could totally do all three.  There was that voice again, ” you should try that.”  This time I hushed the voice and instead agreed to run a 10K with some of my girlfriends.

I feel like this is a good time to reveal that in addition to having struggled with knee injuries and not running outdoors in probably 5 years, I don’t really like being submerged in water and I never learned to ride a bike.  Don’t get me wrong, I have taken my fair share of spin classes, but the last time I rode a bike I was about 4 years old and it ended with me in a very thorny rose bush! After which I proclaimed that I didn’t need to ride a bike, I had a horse that I could ride instead.  And I never got on a bike again.

Somehow I still had a mildly delusional confidence that I could could be a triathlete and that felt out of character.  Why did I feel so sure I could do something that felt so far outside my wheelhouse?

I was so sure that the hardest part was going to be running, so I told myself that if I could complete a 10K, I would register for my first triathlon.  So last Fall, I registered for the 10K in the Arizona Rock and Roll Marathon.  It wasn’t pretty.  I’ll share more about my struggle to become a runner later.  I ended up walk/running the 10K.  While I wasn’t really happy with my performance, I liked the feeling of accomplishment.  The very next day I looked up a training plan for my first triathlon.  What I didn’t know, was that running would not be the hardest part.

So here I am.  I am working on becoming a stronger runner.  I still have to figure out how to ride a bike without crying and other than 2 early morning swim sessions, I have a lot of training to go with swimming.  It doesn’t matter though, I am going to do a triathlon. I have a long way to go, but I am planning to share the story here for anyone who is interested.